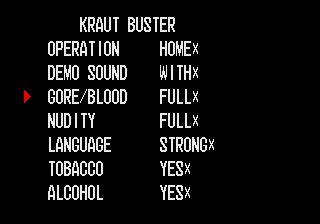 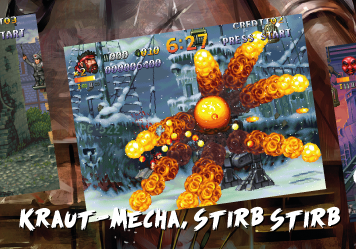 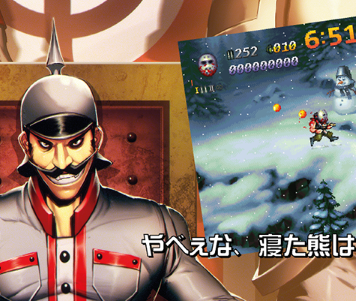 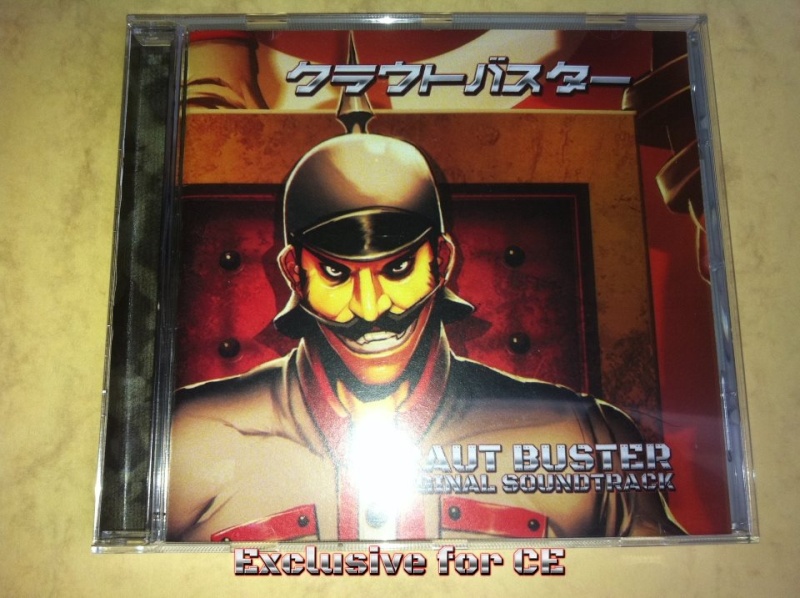 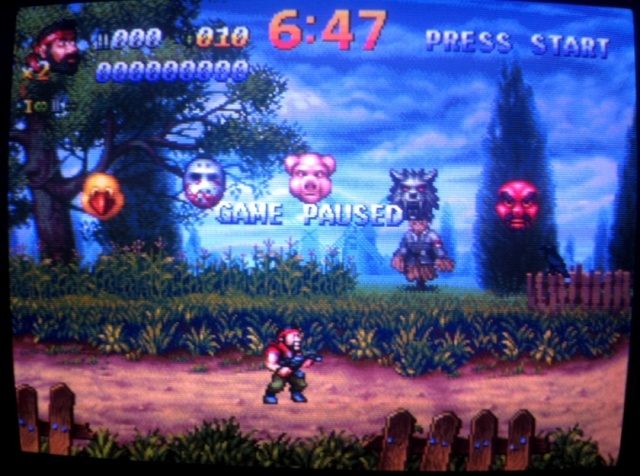 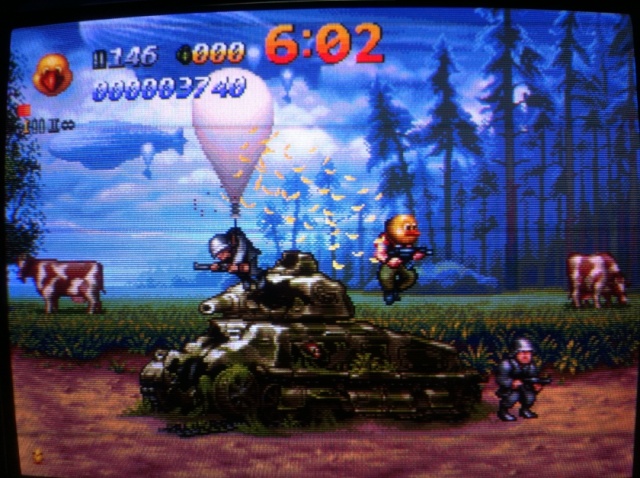 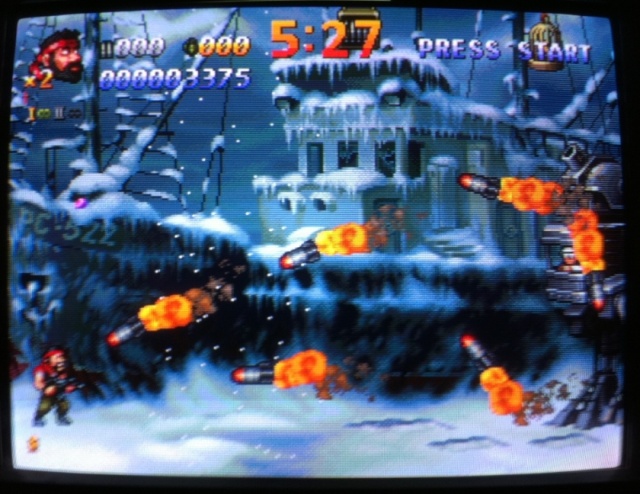 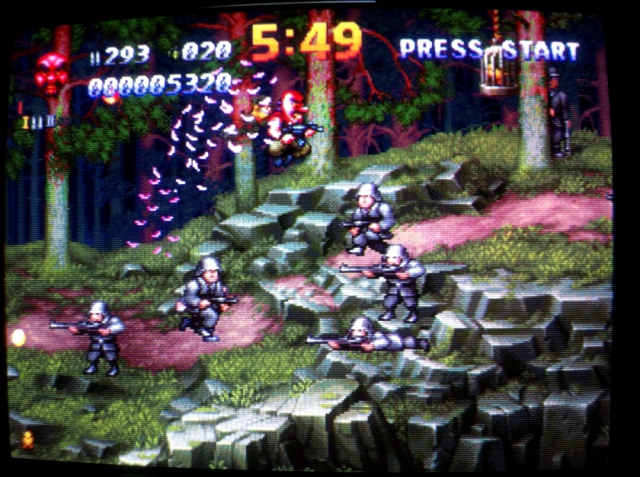 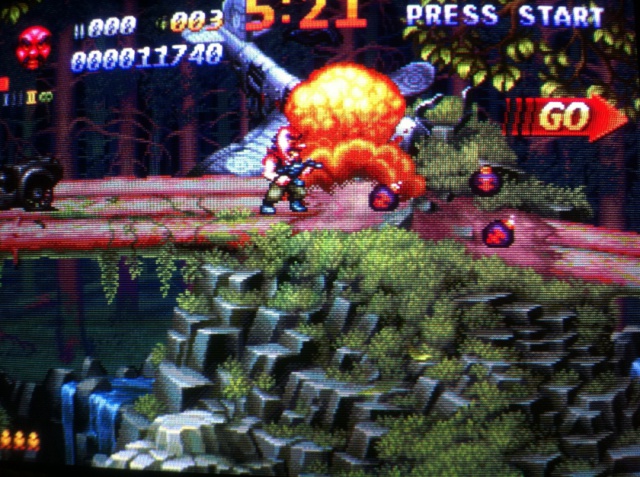 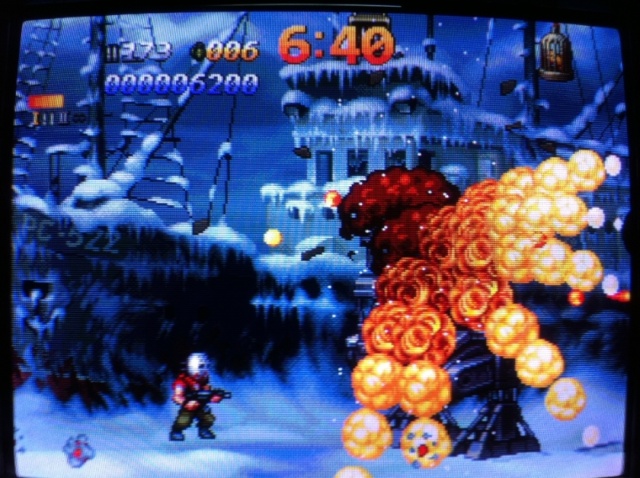 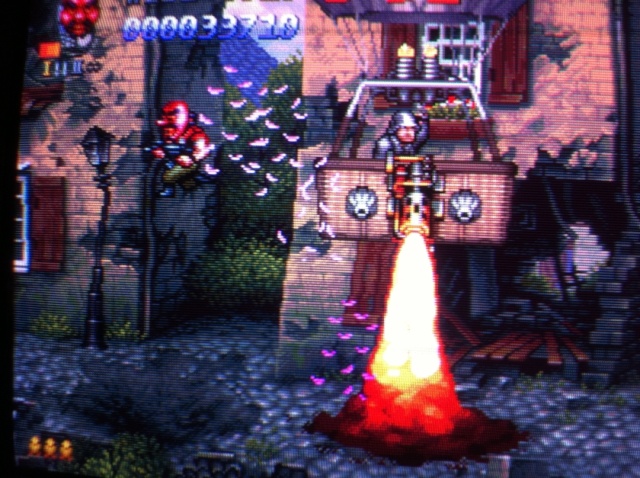 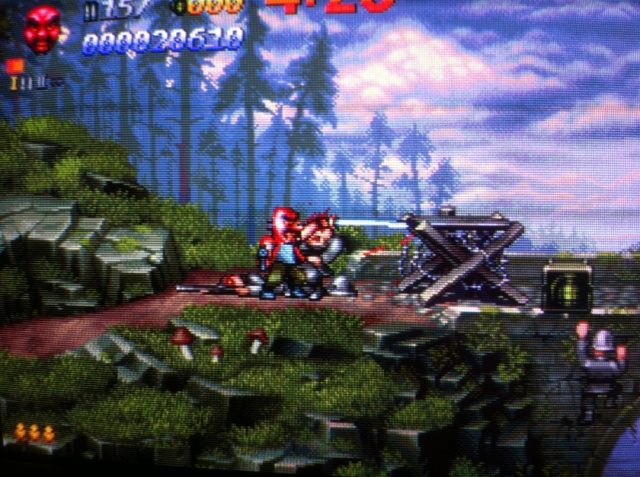 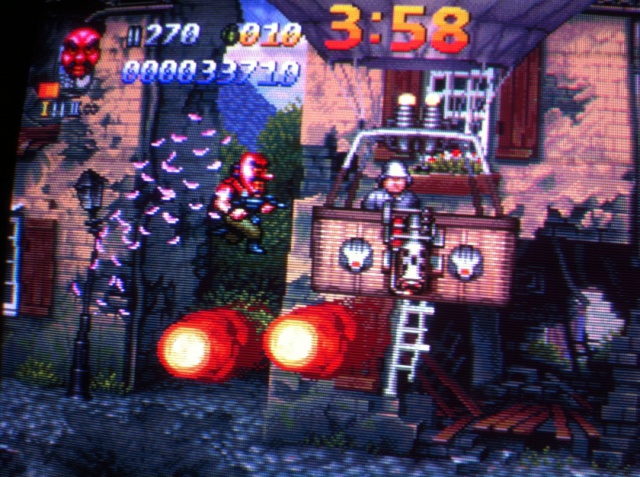 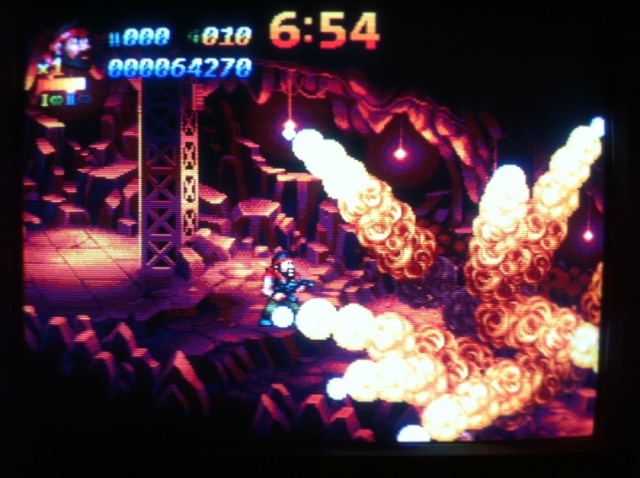 We recommend to first watch the new trailer and then read the long text:


This video shows an early development version.
Due to a change to a different musician team all music is extremely early.
We are going this time with a FM/chip tune sounding soundtrack.
The music is done by the team Groovemaster303 and Jredd.

As we got mixed reactions for the last video trailer we worked very hard to improve on all fronts.

As some people think this is a blatant MS clone,here are some differences listed:

- Chicken mask: become John Chickenstein and rescued chicks will join forces with their Gatling guns. You can also float slightly down with your feather power and drop big egg grenades.

- Wolf mask: supercharge your weapon power and make the grunts your little pigs. Rage flows early through your body. May have reduced scoring potential, but is easier to play.

- Pig mask: sniffle out secrets like a truffle pig and don't get eaten by the big bad wolves. Your tasty bacon body withstands a few bullet hits. Reduces difficulty in a passive way.

- Japanese "Tengu" demon mask: Jump as high and fast like a Ninja, use a Katana for close range attack and lay fused bombs (use them tactical). Also 3-way shuriken throwing ninja chicks.

Currently we have 5 mask implemented, but we plan to add 4-6 more, like "Vampire Hunter" mask (chain whip in the dictator's castle?), "Gunlord" mask (maybe with his wheel bombs?), "Uncle Sam", "McKraken Nerd mask", "Chainsaw killer mask". The possibilities are endless.

- Rescued chicks can act as sidekicks (depends on the mask). For example they shoot a Gatling gun, throw shurikens and knives. The amount of chicks attached change also their behavior.

- Contra style controls and game play elements such as:

8 way aiming
Aim lock (lock the weapon in a direction to better shoot enemies from above)
You can hold 2 weapons and switch between them anytime. If you die, you only loose the active one. (adds a nice tactical component)
With holding the lever in direction you can throw grenades further away
You can drop down from ledges/objects and outmaneuver enemies from above.
Faster pacing
Weapons like 3-way, scatter particle shotgun, arch grenades and others
Lot's of mini bosses (a little bit boss fest style here and there)
Spawning run-in enemies in some run'n'gun sequences.
1 mid boss per stage
2-3 scenario changes per stage
Different characters may have slightly different abilities (like speed/jump height)


- 2 players can co-op/interact with each other, like standing on the shoulders of each other to reach higher places. The score counter is shared for maximum co-op feels.

- Stages are up to 9000 pixel long pixel art drawings (no tiles, just like a huge fighting game background)
It's probably one of the most ambition pixel arts games made in a long time. No other company out there besides us is doing real 16 pixel art arcade games anymore and especially not in this scope.

- physic simulation for dead bodies/body parts, a first on NEOGEO! and a first on 16 bit?  (currently in BETA)

- 60FPS/60Hz twice as fluid, twice as responsive, zero the lag of MS games.

- one of the biggest and most ambitious games developed for NEOGEO since SNK's unfortunate demise in 2000.

We want this game to become our masterpiece and tribute to NEOGEO and we are willing to continuing work very hard for it. If you have any feedback how we can further improve or cool ideas for mask items please don't hesitate to contact us. You can contact us anonymous too: http://www.ngdevdirect.com/contact_us.php (just use some bogus email).

If you don't follow us on social medias, you can find some new CRT screen shots and product photos here: http://www.kraut-buster.com

TL;DR: Kraut Buster will be awesome!

here is the current state of Kraut Buster for NEOGEO.

We have a new video ready here: https://youtu.be/TMix_9cesik

This video uses a simple RGB CRT effect to make it look a little bit like an arcade screen.
It's recommended to watch it full screen to prevent distortion and to have it run in 60fps.

We kept the video intentionally short as we don't want to spoiler too much of the game.

It's the first time we show the player character: Jack "Handsome" Rowdy and the "contra" mode (displayed as C-MODE).

The C-MODE mode changes the gameplay to a faster more action and running and crushing oriented gameplay.
With less stops, less energy for enemies and less bullet sponges.
Masks and treasures/collectable/secrets are removed in C-MODE to keep this mode as clutter free as possible.
The player's knife attack is also disabled to keep the gunning flow.
To compensate the "simplicity" of this mode we also added a fast kill score system additional to the timed chain system to increase long time appeal of the C-MODE.

Mission 3-1 you are fighting your way across a military train towards it's locomotive to stop it.
It has 4 parallax layers. Far away background, background, train, foreground details.
All train cars have a nice full body hand pixelated driving motion effect applied to them.

Mission 3-2 is about battling yourself through the ruins of a bombed village, a train wreck and destroying some experimental weapon system in the train yard.
It also introduces the enemy characters: Vixens of the Dictator "Heiße Helga" and "Herrin Peitsche"
We are only showing the first 60 seconds of ca. 6 minutes.

Both missions are also very military. While mission 2 and mission 4 have monsters, robots and tesla enemies.

As you can see in the map screen the game has 9 selectable missions.
Some missions consist of several "rooms" with their own settings and graphic sets. Right now we have about 17 "rooms".
Each mission ends with a proper and individual end boss. All stages also have mini bosses.

The base game will be finished in December/January.
We included below information of which nice to have graphic details we want to add to the game and will see if you guys give us the time for it or if you guys want an earlier release.
We won't do a vote, we will just go with the general impression of the mood we get from you guys.
If we produce the PCBs in December we can do a release in January. A release in February is advised though.

The allotted graphic development budget of KB will be used up after December, we will then start the next pixel art game for NEOGEO.

Shipping is done as always in this order: MVS LE->MVS RE->AES CE->AES RE (order of payment)

Features that we would like to implement but that need more time:

- Proper story intro / ending / special ending / new fitting music composed
- 3rd character: Valaria "Bona" Bossa (needs to be drawn from scratch unless we reuse the legs of the guys)
- Proper character select screen
- Character customization: skin color / cloth colors
- Mission select screen (partially implemented as you can see in the video, but we would like to include some fun stuff happening on the map)
- Animated title screen
- Adding more destructibles, parallax scrolling and small background animations in the stages
- Player stage win animation (each character)
- Experimental: Sliding for players in C-MODE to make it even more fluid/speedy (requires extra frames for each character) / can have large implication on gameplay / not sure if it can happen

We redrew some later backgrounds from scratch to boost quality even further.
We redrew most explosions.
Added a fast kill / quickkill score system

Having the game run in 60 fps was also quite time consuming at times and not an easy feature to archive.
While we have up to 2x the amount of objects on screen the engine kinda runs up to 4x times as fluid as similar games on NEOGEO (60 fps instead of 30fps).
A lot of optimizations, trickery and out of the box thinking was required to archive this.

We wrote a new Z80 sound driver for better handling the limited resources and adding new features such as user adjustable music volume.
We are not sure but we think it's the first time that it's possible for the user to adjust music volume in a NEOGEO game!?

All our future NEOGEO games will benefit from those engine upgrades.

It also looks like KB could become a gigashock game as it is approaching 512MEGS for graphic ROMs. Music is already at 512 MEGs.
It would be the first pixel art giga shock NEOGEO game ever.

We added some new hardware features on our custom PCBs, implementing them and using them well will take additional time too:

- WLAN for example to do software updates / worldwide online highscore list
WLAN needs quite some testing both in hardware and software, hopefully it will make it.
Having WLAN on NEOGEO would be quite cool and could lead to interesting stuff in the future.

- Micro SD-Card (software update) to replace USB update. If WLAN does not work out we maybe add this to AES too.
Allows software updates without the need of a connection to a windows PC.

Those hardware costs are covered by us for the existing pre orders.

This video was recorded at 59.18 FPS -> speedup to 60 FPS and a simple artificial scan line CRT effect was overlaid in post production (line tripling 3x 224p->672p). The music are MP3s of the in game OST overlaid.
The videos were recorded on an unoptimized debug built.